In 2011 Jenny Halstead, a well known professional artist, was appointed as the first artist in residence at the Harris Garden. You may have seen her in the garden with her sketch book.

In May/June 2013 an exhibition of her paintings and sketches of the garden was held at the Museum of English Rural Life (MERL). Her book “An Artist’s Year in the Harris Garden” was published by Two Rivers Press and is available to purchase.

It is hoped that another similar appointment will be made by the University in the near future.

Articles about Jenny and her work in the Harris Garden have appeared in the these magazines:
The Artist , June 2013 edition
Berkshire Life, May 2013 edition 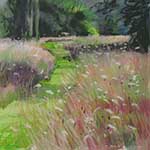 The Path Through the Grass